In particular, the sale of stock to an ESOP can create a liquidity event for the business owner(s) (either through the sale of part or all of the stock owned); dramatically minimize the tax consequences of a transaction of stock relative to other typical liquidity events; eliminate corporate income taxes; and foster a corporate environment that dramatically increases productivity and profitability.

ESOPs are a type of defined contribution benefit plan (similar to a 401(k) plan) that are designed to purchase and own company stock of the employer. ESOPs are unique in that they are the only employee retirement savings plan that the law permits to use leverage to acquire the employer stock. Although ESOPs have been around for decades, recent favorable legislation and greater realization of their benefits by legal and financial advisors have increased their popularity as a succession-planning tool.

According to the ESOP Association, there are approximately 11,500 companies in the U.S. that are owned in part or completely by an ESOP. These companies collectively employ more than 10.0 million people. In more than 60% of these companies, the ESOP owns more than 50% of the common stock outstanding.

One of the most important issues in succession planning is providing liquidity to the owner(s) of a business. Some owners want to sell all of their stock and no longer be involved in the business; other owner(s) want to diversify their assets, sell part of their stock and continue to be actively involved in the management of the business. ESOPs can be used to accomplish both of these objectives.

In particular, ESOPs are especially beneficial to owner(s) who want to sell a minority interest in the company’s stock. It can be difficult to sell a minority interest in a privately held company since most private equity funds, other financial sponsors and strategic buyers prefer to acquire control of a company. Alternatively, business owner(s) could have the company redeem their stock or pay a special dividend. Both of these transactions are similar to an ESOP transaction. However, shareholders selling all or a portion of their stock will typically be able to defer capital gains tax indefinitely. Accordingly, an ESOP represents a particularly attractive buyer for a business owner who wishes to achieve partial or full liquidity and may allow selling shareholders to receive more after-tax proceeds than would be possible from a non-tax advantaged transaction.

In addition to creating liquidity, an ESOP transaction will have other benefits relative to traditional liquidity events, including:

In certain situations, a strategic buyer (e.g., a competitor) may be willing to pay more than Fair Market Value for the stock. In these situations, the strategic buyer’s offer will be higher on a pre-tax basis than what an ESOP could pay. However, given the tax advantages of an ESOP transaction, a strategic offer may not always be higher than an ESOP offer on an after-tax basis.

The benefit of an ESOP is that the cost of paying for the stock (i.e., the company repaying the loan or pre-funding the ESOP) can often be mitigated through:

The typical transaction to an outside buyer can take six months to a year or longer to complete, involves significant due diligence, and ultimately involves higher risk of the transaction being terminated by either side. From a transaction process point of view, an ESOP transaction can offer several benefits, including:

When a business owner sells a majority interest in a company to an outside buyer, the business owner no longer controls the company. The new owner can change the name of the company, move or shut down operating locations, terminate employees, etc.

Many business owners want the legacy of their company to continue after they exit the business. An advantage to an ESOP transaction is that the selling owner can receive liquidity and still keep the company independent. In addition, the business owner can still be active in the management of the company following an ESOP transaction. An ESOP is represented by a trustee, who may either be an internal trustee (someone affiliated with the company) or an external trustee (someone independent to the company and the shareholders). The board of directors generally decides who will be the ESOP trustee. Under most circumstances, the ESOP trustee votes the stock owned by the ESOP – not the ESOP participants. If the selling business owner decides to be the trustee of the ESOP, he will have voting control over corporate votes (recognizing that he has a fiduciary obligation to the ESOP). Even if an independent trustee is used, independent ESOP trustees are not involved in the day-to-day operations of the company and typically serve as a passive investor who is primarily concerned with protecting participant value.

The sale of company stock to an ESOP can be structured to defer capital gains taxes indefinitely. As presented in the following chart, if a business owner sells his stock for $50.0 million to an ESOP instead of in a non-ESOP transaction, the business owner would net an additional 20% or $10.0 million in after-tax proceeds, assuming his stock had zero basis. Based on this example, the business owner would have to sell his stock at a 25% premium (or $62.5 million) in a non-ESOP transaction before his after-tax proceeds would be equivalent to the sale to an ESOP. 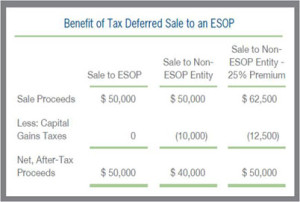 In order to qualify for the tax deferral:

QRPs are securities of a domestic operating corporation. This includes the corporate stocks and bonds of public or private companies. The seller defers capital gains taxes until the sale of the QRPs. Only the QRPs that are sold are taxed, allowing the seller to spread the tax over his lifetime or defer it until his death. One option is to purchase floating rate notes with long maturities (30 to 60 years) and high credit quality. The seller can then receive the interest from these notes until his death or find a financial institution to offer him a margin loan against the QRPs. This allows the selling shareholder to use the proceeds of the margin loan as he desires. Not only has the owner deferred capital gains taxes by investing in QRPs, he has diversified his investments.

There are a number of benefits to be derived by companies that are ESOP-owned. One of the most significant is the elimination of corporate income taxes. Corporate income taxes are eliminated when the ESOP owns all of the common stock of an S corporation. This occurs because the income from an S corporation is “passed” to the shareholders of the corporation. Because the ESOP is a qualified retirement plan, it is exempt from paying income taxes on its income. This benefit creates a tremendous competitive advantage for the company. 100% ESOP-owned S corporations can use this additional profitability to be more cost competitive (when necessary), accelerate debt repayment, gain greater synergies from acquisitions, etc.

While there are limits on the number of shareholders an S corporation is allowed to have, the ESOP is considered one shareholder for income tax purposes. As a result, a company with 1,000 employees could be a 100% ESOP-owned S corporation that does not generate income tax liabilities.